Koffi Olomide will be in town this month for a number of charity activities and a music concert. He will be the headlining artiste at a charity concert organised by Rotary Uganda. Here’s a few facts about the singer.

1] Koffi Olomide is 57 Years Old. He was born Christophe Antoine Agbepa Mumba, to a Congolese father and Sierra Leone mother on 13 July 1956.

2] The name Koffi was given to him in accordance with the common West African naming tradition (Sierra Leone, Ghana) in relation to the day of the week one is born. Koffi is one of the names given to boys born on Friday.

3] Koffi Olomide is a proud holder of a Bachelors’ Degree in Business Economics. He also has a Masters’ Degree in Mathematics from the University of Paris.

4] He started his music career with Papa Wemba's band, Viva la Musica, initially as a composer and song-writer, and later as a vocalist and lead-singer.

5] The name Olomide was coined during his time at Viva La Musica. Koffi was such an impressive songwriter that one day in 1977 Papa Wemba exclaimed, "Ooh! l'homme idee" (French for: Oh! the idea-man!). A funkier version of the words was adopted - Olomide. Koffi Olomide would later become his official stage name.

6] He went solo in 1986, forming his own band that he called Quartier Latin. He does a unique genre, a slower style of soukous that he calls Tcha Tcho.

7] Koffi won four Kora Awards at the annual Kora Awards in South Africa in 2002 for his effort on the album: Effrakata. These included the award for Best African Artist, which he had earlier won in 1998.

9] In August 2012, Koffi Olomide was found guilty of assaulting his producer. Earlier on, in the same year he had been charged with raping three of his dancers. The charges were later dropped.

10] Koffi Olomide probably holds the record for the biggest number of aliases by any musician in the world. He is known by a total of at least 35 names. Known names include the following;

Koffi courted controversy after he attempted to add Pape Noir (Black Pope) to his numerous names, a move that did not go down well with the predominant catholic DR Congo fraternity.

It put an end to 8 Years of a turbulent reign in Uganda's Politics. It was not without its humorous moments and left us with memorable quotes. Read On...
1] "There is freedom of speech, but I cannot guarantee freedom after speech"

2] "If we knew the meaning to everything that is happening to us, then there would be no meaning."

3] "Sometimes people mistake the way I talk for what I am thinking. I never had any formal education. Not even nursery school certificate. But, sometimes, I know more than PhDs because as a military man I know how to act. I am a man of action."

4] "I was a good soldier in the British Army. I was born in a very, very poor family. And I enlisted to escape hunger. But my officers were Scottish and they loved me. The Scots are good, you know."

5] "Politics is like boxing. You try to knock out your opponents."

6] "In any country there must be people who have to die. They are the sacrifices any nation has to make to achieve law and order."

8] "I want to be remembered as a great athlete. As a boxing champion."

9] "I am not a politician but a professional soldier. I am, therefore, a man of few words and I have been brief through my professional career."

10] "We Africans used to carry Europeans, but now Europeans are carrying us. We are now the masters. They came from Britain and wanted to show that they really have power in my country"


In my office, we distribute finished reports in PDF format. For larger documents, we include a cover page and table of contents. Unless I have the cover page marked as page 1, the numbering for my document is off. If my readers type in the page number from the table of contents at the top of the PDF, it will take them to the wrong page.

In order to exclude the cover page and table of contents and still be able to type in the page number, I use custom page numbering in Adobe Acrobat Pro. This is also useful in turning several pages of Excel into one document without having to manually enter the page numbers.

The Page Numbering dialogue box opens, as shown above.

Step 2 - Select the page range for the title page and table of contents.
Under style, select the numbering you would like to use. I use small Roman Numerals (i, ii, iii…). 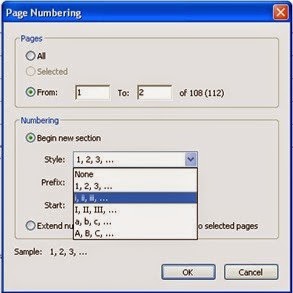 The Header and Footer dialogue box will open.
·         Select where you would like the page numbers to appear on the document. In this example, I placed the page number in the Right Header by placing my cursor in the box as shown below, and then selecting the Insert Page Number button. The number will appear as shown in the Right Header text box.

·         The page number and date can be customized using Page Number and Date Format (blue link to the right of the buttons, shown below). 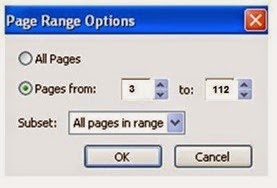 ·         Using the Page Range Options link, shown above, you can select on which page you would like your numbering to begin. I often set numbering to start after the title page and table of contents, so I set the “Pages from” to 3 to 112 as show below.

Now readers have an easy way to navigate the document. They can access the table of contents and easily type in the desired page number in the Find field. This is a quick and easy tip that creates a professional, user-friendly document.